Tamales, empanadas knife cut meat and potatoes, Torrontés wine, cheese. To the delight of travelers, salteños flavors gather around the table in their home.
Late in the morning, singers and poets gather in a bohemian atmosphere loaded. In the rock, between glasses of wine and folklore, they were born and born zambas, chacareras and love affairs. Are the roots of the local tradition that everyone wants to be witnesses during the tour in the province of Salta.

He imbibed the cultural environment and the northern cuisine, so full of flavors, is a possibility to reach every corner of the province. There are classics that everyone knows and want to try, such as meat pies salteñas knife and cut potatoes seasoned with paprika Valley. They are chiquitas and juicy, ideal to start any meal. There Torrontés wine and dishes that are only found fresh in this area, because they carry ingredients that are born in these soils, with that intensity. Humita in chala, sweet cayote, roast kid made the stake, lamb, cottage cheese, beef jerky, Andean potatoes; all may be associated with chicha (corn drink) and hosts (carob) to toast so great culinary wealth. Worth buy molasses and spices to bring home, and there are other things that we can only enjoy the moment, as a good locro in a cold nochecita.

Throughout the year, the northern flavors are available to travelers. Spanish combine the Andean culture, and of indigenous peoples, based on local raw material and the fruits of their own culture systems, in steps, with ancestral and conservation techniques.

The ceremony involves not only the tasting. The magic is in the context of the landscape that accompanies and utensils, eating in a crock with the color of the earth and to receive that energy “pulsuda” to be strong and face a trip the next day or dancing all night in a traditional house. 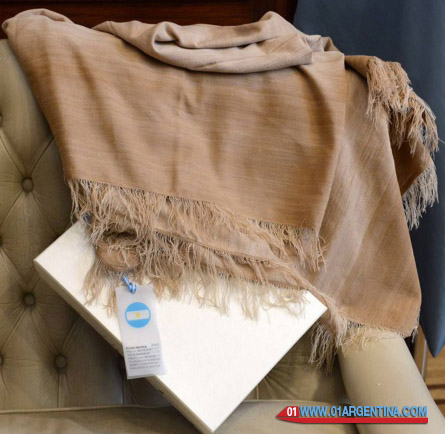 The blanket vicuna gave Juliana Awada Michele Obama – “They chose the thin blanket of all that was in exhibition The Warping of this blanket was made with 1,500 strands and was woven on a rustic loom in a single piece of 1. , 30 meters wide. it was completed in late 2015, “said Juana. However, she clarified that it is not the first time that a blanket made by members of the Association reaches the hands of an important personality: “A few years former President Cristina Fernandez de Kirchner ago he gave the pope Francisco a poncho produced by Petrona Molina who is also part of the Spinners and Weavers Vicuña “he recalled.

Nine towns in the province of Catamarca gather in a tour to more than 300 artisans engaged in traditional weaving loom in Creole. Everything happens within a framework of valleys, archaeological sites and regional foods.
In the warp threads slide criollo loom with hands rustic master weavers. It is that these men and women artisans weave with the same ease with which they breathe. They do it from soil inhabiting our native cultures, the technique directly transmitted grandmothers, mothers and sisters. Route Loom in Catamarca invites to connect with learning and culture in the landscape of mountains and valleys. In perfect balance, surprising both the nature and the starry night like seeing their ancestral work motivated locals.

While in principle the basis of the economy was matriarchal, it was diluted with time and today the whole family works spinning and weaving. Knowing these artists in their own homes and buy ponchos and fabrics directly from producers helps spread the soft cadence with which they spin without fiber concerns llama, sheep and vicuna. Never missing the mate that goes hand in hand, the sun and the outdoors, as they are opencast factories; in each courtyard is a loom and sometimes it works in eight hands. Outside the house, the Bethlehem river accompanies the tour of an area full of archaeological sites to visit, such as the pre-Columbian city of El Shincal.

Each location of the route has its unique design features. There incaicas guards, tied guards, rustic and frisados, with earth colors or natural dyes. They are in total more than 50 posts with more than 300 artisans which are crossed.

Of course, there is also room for gastronomy, which in this area is full of riches. It is highly recommended to try the gigote, a kind of cake made very good pot to accompany a local wine; and if you want to buy something to take, there is excellent chili pepper, cumin, anise and nuts. Of course, we must place them in the bag, which will probably already full of ponchos and tissues.

This entry was posted in Uncategorized. Bookmark the permalink.