Travel in style and in comfort – enjoy the best Buenos Aires has to offer with our luxury tours and accommodations. Buenos Aires is home to museums, historical sites, tango shows, and much more. Experience this incredible city with our luxury travel tours. The travel packages we offer provide premium tours to the most important parts of the city, as well as luxury accommodations in the top hotels of the city! Travel with the comfort and premium quality tours that you deserve – travel in luxury with us, to one of the most important cities of the Americas.

The city of Buenos Aires is the capital of Argentina. It is located in the central-eastern part of the country, on the western bank of the famous river Rio de la Plata, in the region of the pampas. The final results of the 2010 census estimated the population of the city at 2,890,151 inhabitants, making it by far the largest urban area in the country, and the second largest of South America. 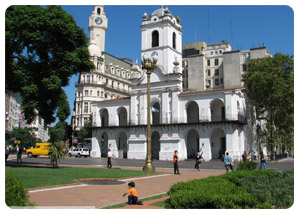 Buenos Aires is also the most visited city in South America and is home to some amazing tourist attractions! Many of these attractions are located in the historic center of the city, an area that runs through the neighborhoods of Monserrat and San Telmo. The city began to be built around the Plaza Mayor (now Plaza de Mayo), and the administrative institutions of the colony were installed in the area. East of the Plaza you can find the Casa Rosada (the Pink House), which is now home to the executive power in Argentina’s government. To the north of the Plaza is the Metropolitan Cathedral, which was also built in the colonial period, and the famous National Bank building. Another important institution is the colonial Cabildo, located to the west, which is now a historical museum.

The famous avenue ‘Avenida de Mayo’ links the Casa Rosada with the Congress building, headquarters of the executive and the legislative branches, respectively. This avenue is home to several important sites of cultural, architectural, and historical value. By walking along this famous street you’ll find the Casa de la Cultura, the Palacio Barolo and the famous Cafe Tortoni, among others! Under this avenue runs the metro Line A, which was inaugurated in 1913 and was the first metro line in all of Latin America. In the nearby scenic and historic neighborhood of San Telmo you’ll find the Plaza Dorrego, famous for its Sunday antique fair, tango shows, and outdoor cafes. 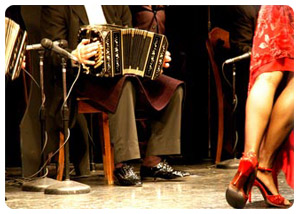 Tango and Culture in Buenos Aires

Buenos Aires is one of the most important cultural centers in the Americas. There are numerous museums, theaters, and libraries that can be visited and explored. The city government runs 10 museums, many of which are history or art museums. The national government has also established several important museums including the museum of the Casa Rosada, and there also many private museums that are famous for its collections and exhibits (like the Latin American Art Museum of Buenos Aires (MALBA) and the Fundacion Proa). The city is also notable for its publishing industry and literary culture. The distinct and fascinating cultural identity of Buenos Aires is reflected in numerous events and popular forms like its slang, ‘fileteado’ (a popular decorative art form), and, of course, its remarkable music genre, tango.

Buenos Aires is an incredible, cosmopolitan city with a fascinating cultural identity! Explore everything the city has to offer, experience its museums, tango shows, historical cites, and unique attractions in style and in comfort. Travel with us – travel with our luxury tours, and you’ll get to see the city while enjoying premium tours and accommodations.