A trip to Argentina is not complete without visiting Patagonia (and of course, while spending a few days in Buenos Aires, a visit to the Iguazu Falls, a trip to explore the northwest with Salta and the Quebrada de Humahuaca included, a step through Mendoza and its vineyards). Now if we are talking about the basics to see in Argentina, Patagonia is a destination that should be visited and that requires knowing certain issues before thinking about visiting it.
What do you need to know before organizing a trip to Patagonia?

– First of all, Patagonia is a vast, huge region. So extensive that it covers two countries (Argentinian and Chilean Patagonia). But also, within each of these countries Patagonia is still a huge region, an area with its own variations of climate inside. So much so that we can find temperature differences of up to 20 degrees in the same day depending on the place where we are. Or drastic landscape differences: from deserts to mountains and forests, from windy and dusty areas to millenary glaciers. Between each of these situations we can talk about thousands of kilometers away (I insist, without leaving Patagonia). Many times I get consultations about visiting points like Bariloche or the Perito Moreno glacier in the same trip, without knowing that we are talking about places that are 1500 kilometers from each other, almost “nothing”.

– The reasons to visit Patagonia are many.  I will summarize it in this paragraph: unaltered landscapes during enormous distances in which there are hardly any cities, incredible places of nature and incomparable with anything that you have seen before, a region where to find the “end of the world” to the south of Patagonia, new experiences in nature (imagine walking on a glacier, or kayaking among ice floes, observing marine wildlife in freedom, witnessing unforgettable sunsets) …

– Patagonia requires spending an important time. If we talk for example about visiting Bariloche and its surroundings, reach Calafate and the Perito Moreno glacier, and then continue to Ushuaia, we are talking about at least devoting ten days (about two to three to each of these points). In addition, to see these three points we will have to connect with airplanes, because the distances, I insist, are huge between one point and another.
Things that can happen to you in a trip to Patagonia
You will feel insignificant more than once (and be left speechless

What they see is just an appetizer of what they expect if they travel through Patagonia. Now, I’m going to concentrate on deploying in the guide the practical and simple way to understand this region and organize a trip to Patagonia Argentina. 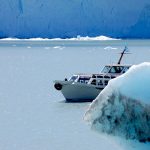 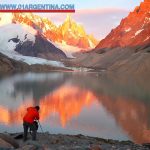 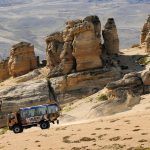 1. How big is Patagonia Argentina?
The Argentine Patagonia covers six provinces (and, in addition, each of these provinces is huge): part of La Pampa, Chubut, Neuquén, Río Negro, Santa Cruz and Tierra del Fuego (province more august than in its territory includes Antarctica and Islands of the South Atlantic). There are 930,638 km² that are said soon. In turn, it is the least densely populated region of the country. To have an idea from Ushuaia to Bariloche (two of its most important tourist cities) we are talking about a distance of 2171 kilometers.

2. How to get to and visit Patagonia?
I think it is one of the main questions of any traveler who intends to visit Patagonia. And since there are different ways to visit Patagonia, here are the most usual modalities:
Travel to Patagonia by plane: either with agencies or for free, Patagonia for foreigners who come to Argentina for the first time is usually visited by plane (on the other hand the Argentines usually when we travel to Patagonia we do it in several trips along life, because it is very difficult to travel all at once). Travel agencies usually put together a package of flights and hotel nights in the most common destinations (Ushuaia, Bariloche, Calafate is something like the essential trio, but you can also include Puerto Madryn and whale watching if it is the right season , this among the most classic). If we organize it for free, the option is to fly from Buenos Aires to Bariloche, and if the dates and availability of flights allow us, fly from Bariloche to Calafate> Ushuaia> return to Buenos Aires. You will notice that in Argentina the flight connections often go exclusively through Buenos Aires, this means that if the dates of the flights Bariloche – Calafate do not coincide, another alternative is to fly to Bariloche> return to Buenos Aires> flight BsAs to Calafate> Ushuaia (by plane or by bus)> flight from Ushuaia back to BsAs.

3. What are the 3 main tourist airports in Patagonia?
There are several airports and cities where you can start your trip to Patagonia, there are even relatively important airports in cities that are not so touristy in Patagonia. Here I am going to name important airports in tourist cities, I would say there are three:
International Airport of Bariloche (Tte. Luis C. Candelaria). (IATA: BRC – ICAO: SAZS). It is in the province of Río Negro, north of Patagonia, and is the gateway to one of the most beautiful and important winter tourism cities and landscapes of Patagonia (you can visit and dazzle all year round). Below you will find in detail the reasons to travel to Bariloche and other cities.
El Calafate International Airport (Commander Armando Tola) (IATA: FTE – ICAO: SAWC – FAA: ECA). It is in the province of Santa Cruz, and its importance lies in the fact that it is the gateway to the famous Perito Moreno Glacier and the Glaciers National Park.
Ushuaia International Airport (Malvinas Argentinas) (AIU-MA) (IATA: USH, ICAO: SAWH). It is the airport that will make us the gateway to the so-called “End of the World” on the Big Island of Tierra del Fuego, and in the southernmost province of Argentina.

This entry was posted in Uncategorized. Bookmark the permalink.